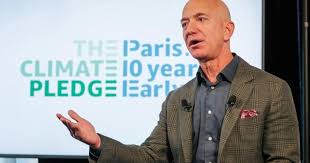 On this Monday, the richest man in the world has used the social network which is owned by Mark Zuckerberg to announce his plan of saving the planet

In a post he made on Instagram, Jeff Bezos has made an announcement about his plans of launching the Bezos Earth Fund which is an initiative through which he has said that the fund is going to work with the activists, scientists and also NGOs among the others. The fund is going to begin the making of grants in this summer and Bezos through the post also gave a message of inclusiveness when it comes to protecting the earth and said he feels that the earth needs everyone to come together and protect it.

The announcement has not made any mention of Amazon which is his company. In the month of September 2018, a report had made a disclosure about their carbon footprint which was 44.4 million metric tons in the year 2018. This is more than the carbon footprint which has been estimated for the whole of the country of Angola but is less than 1% of the total carbon footprint of the United States and is lesser than the chief competitor of Amazon, Walmart. Amazon has said that it is targeting to be carbon neutral by the year 2040 which is 20 years from the time this report came out.

Bezos is worth close to $130 million and he has been stressing on environment though for a lot of people he hasn’t done enough for the environment and they have been critical towards his contributions to the environment specifically the Australian bush fire.