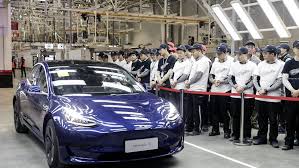 The skyrocketing shares of Tesla tumbled drastically as it closed 17.18 per cent lower on Wednesday to read USD 734.70 per share. Projections of Tesla Shares breaching the USD 1,000 mark were surfacing on the Wall Street headlines, but the recent tumbling does change the equation a fair bit. Wednesday’s 17.18 per cent fall is made it one of the worst days in history for Tesla’s stocks. The downfall was triggered after Tesla announced that the Coronavirus outbreak in China will cause a delay in deliveries of its Model3 Sedans manufactured in its Shanghai Gigafactory.

The Coronavirus outbreak has caused all major companies with any sort of Chinese connection suffer a low in the stock market. However, Tesla’s shares kept growing despite most of its success from its factory that was recently started in China. A drop in share price was accompanied with a downgrade from busy to hold, according to the CanaccordGenuity, who believe more changes are expected after the closure of Shanghai factory. The sharp downfall follows a surprising upward run for Tesla Shares that grew almost 50 per cent since February started. The last such fall for Tesla Shares dates back to early November 2013, when they fell 14.5 per cent.

Talking about Tesla’s operations in China, the company closed all of its stores in mainland China along with its Shanghai Gigafactory. The stores were temporarily closed as China tries to control the spread of coronavirus that has killed over 500 people in the country. Almost half of the companies that have any operations in China have temporarily shut down for an indefinite time causing markets around the world to take a hit. The WHO has declared the situation in China as emergency which has prompted nations to come out in support of China.